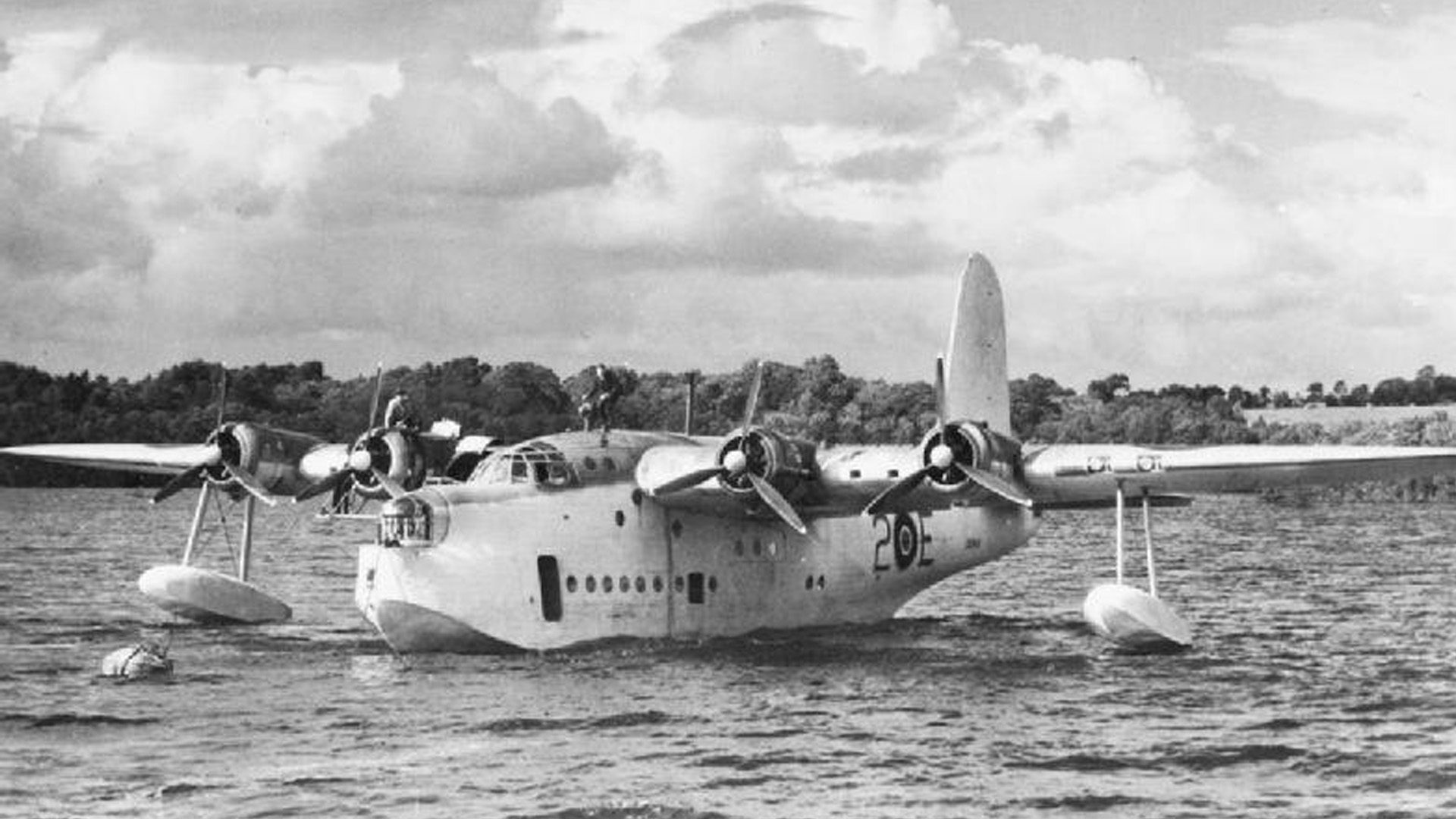 The ancestry of the Short Sunderland stretches back to a 1935 British civil requirement for an airliner capable of travelling for 700 miles, at a speed of 170 mph and carrying 24 passengers. The world was rapidly shrinking.  There was an urgent need for the time taken for passengers and mail to reach the extremities of the old British Empire, to be reduced from weeks by sea, to days by air. At this time such a specification was beyond the capabilities of land planes, so the focus was on flying boats.

Short Brothers Aircraft of Rochester, Kent were renown flying boat manufacturers and they submitted a design for a four engine high wing metal monoplane. In an unprecedented step Imperial Airways, forerunner of B.O.A.C and latterly B.A. ordered 28 of these machines, straight off the drawing board. In late 1936 they started flying routes from Southampton Docks to Egypt, then the Cape, India, Singapore and finally to Sydney, on flights lasting 10 days. Plans were afoot to extend services to North America but the war intervened.
42 of these flying boats were delivered, mainly to Imperial Airways and they were a success. Called the “Empire ” Class or “C” class because each aircraft was christened with a name beginning with ‘C’, they quickly succeeded in bringing the Empire closer together.
Following hot on the heels of the first “C” classes was an Air Ministry specification for a long range maritime patrol aircraft. Shorts submitted a successful design, based upon the “C” class. Gun turrets were added to the nose and tail, and depth charges were housed within the fuselage. When attacking, large panels beneath the wings were removed and the bombs were rolled out under the wings on rails The ranges of the flying boat was also extended to 1,780 miles.
On the 16th October 1937 the prototype taxied out onto the River Medway in Kent, and the first of 777 Short Sunderlands took to the skies.
By 1941 the Battle of the Atlantic was in full swing. German U boat submarines were attacking Allied convoys with the aim of forcing Britain into surrender.  The Sunderland was an important weapon in the RAF’s maritime armory, but with additional armament, bombs and now airborne radar, they were becoming overweight. This manifested itself on the water, causing problems on take off. In December 1941 the Sunderland MKIII came on the scene. Not only did it have the more powerful 1,065 HP Bristol Pegasus engines, but the underwater section of the hull had been redesigned. The ‘step’, the section which allowed the hull to gain more speed through the water had been made more curved, and this enhanced its take off performance. Altogether 461 of this mark were produced, and they became the most prolific Sunderlands in service.
Instead of immediately crash diving once a U boat had been spotted by an aircraft, with increased anti aircraft guns, some submarines chose to stay on the surface and try to shoot their attacker down. To counter this, extra pilot operated machine guns were installed in the Sunderland’s nose. Also streamlined radar antennas in the form of blisters were installed under both wings. Aircraft equipped as such were called the  Sunderland Mk IIIa.
To seek out U boats and give maximum protection to the convoys, Sunderlands had to patrol far out into the Atlantic. Sometimes a patrol would last 14 hours and it was essential that their bases were as close to the Atlantic as possible. The vast Lough Erne in County Fermanagh  Northern Ireland was considered an ideal location, since it was only a dozen miles from the Ocean. But there was a snag. The last five miles to the sea was over County Donegal, which was in the neutral. Republic of Ireland.
In January 1941 a secret agreement between the British and Irish Governments permitted allied aircraft to transit these last few miles over the Republic, “with the intention of carrying out search and rescue”. And so the “Donegal Corridor” was born.
This ‘search and rescue’ guise was immediately flouted and opened the way for squadrons of Sunderlands and American lend lease Catalinas to be based upon the lough. Hundred of patrols were flown using the corridor, as well as the airspace being used by aircraft being ferried in from America. At Castle Archdale, on the north shore of this beautiful lough, the RAF quickly built a major base, with a satellite station along the shore at Killadeas.
In May 1941 a Catalina from Castle Archdale first spotted the German battleship “Bismarck” on her Atlantic break out, and nine submarines were sunk at the hands of aircraft from the lough. It is very difficult to assess the importance the Castle Archdale Sunderland’s played in winning the Battle of the Atlantic. A maritime bomber orbiting a convoy, made it extremely difficult and dangerous for a U boat to attack or shadow a convoy, so it would go deep and remain unseen, and the convoy would safely pass.  How many of these flying boats prevented attacks from submarines? Dozens definitely. Hundreds maybe?