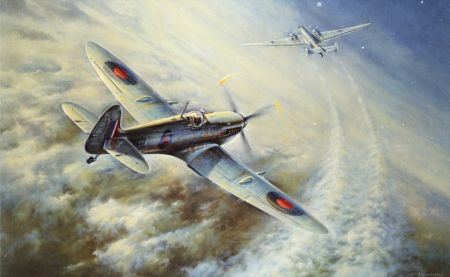 On 12 September 1942 in the skies above Southampton, a lone Spitfire IX intercepted a Junkers Ju86R high-altitude bomber at 44,000 ft. This remarkable aerial battle, which broke all records for height and endurance, is depicted in Jim Mitchell’s painting below.

After the mauling received by their bomber force in the Battle of Britain, Germany changed tactics to the night bombing of towns and cities from September 1940 – what became known as the ‘Blitz’. Goering, the head of the Luftwaffe, was frustrated by the knowledge that his once proud boast to Hitler that the Luftwaffe would easily defeat the RAF had failed during the Battle of Britain, thus making daylight bombing of Britain almost impossible without a long range fighter escort. Goering then tasked his bomber commanders to find some way of bombing England, if only in a small way, to keep up German morale and possibly also his standing with Hitler.
The Junkers 86 bomber had been used in the 1930’s, but was considered outdated by 1939. A few were converted in late 1941 to the reconnaissance role by increasing the wing span and fitting a new pressurised cockpit, so enabling the JU86P to fly at heights over 40,000 feet – a height that the Luftwaffe knew the RAF Spitfires could not achieve at that time. Spitfire pilots were frustrated to see the Junkers drone serenely over Britain a few thousand feet above their maximum ceiling and also above the anti-aircraft shell range taking photos of potential targets with impunity.

The Junkers were doing the same thing in the Middle East – this time monitoring Allied naval movements from Egypt. The situation was intolerable, necessi-tating a local ‘modification’ to a new Mark VC Spitfire, an aircraft that was designed and built here in Southampton. This aircraft was stripped of unnecessary equipment, armour plating and cannon and fitted with a four-bladed propeller and locally made extended wing-tips. While successful in the short-term ‘dissuading’ the Junkers from their role in the Mediterranean, the drier air condition were onlt just suitable for the Mark VC at altitude there, and not in Britain.
At the same time, the Germans, realising that their existing Junkers 86P aircraft were now potentially vulnerable, set about on a programme to improve the aircraft. This they did with the Junkers Ju 86R variant. This aircraft could fly at over 40,000 feet using nitrous-oxide injected diesel en-gines, and an even longer wing span. The Spitfire Mark VC high altitude fighter could not now catch the Junkers. At the same time, the Luftwaffe had adapted the Junkers to carry one bomb of approximately 550lb to drop on British targets, and operations started in August 1942.
Initially, the RAF tried a similar response to that used in the Middle East earlier by stripping down a few of the new Mark IX aircraft of all non-essentials [one wonders whether the pilots were con-sulted….] to try to get to altitude, but without success. The bombing of Bristol by a lone Ju86R on 28 August killing at least 48 people was the final straw for Fighter Command.

To counteract the menace, Fighter Command formed the ‘Special Service Flight’ at RAF Northolt just outside London to produce and adapt an aircraft that could catch these bombers. Six experienced pilots were chosen after exhaustive medical and technical examinations at RAE Farnborough to staff the flight under the command of Flt Lt Jimmy Nelson, an American who had flown in the RAF ‘Eagle’ Squadrons earlier in the war. The three Eagle squadrons were generally staffed with United States citizens who had crossed the border into Canada to fight with the RAF before the United States joined the war in December 1941, risking not only their lives, but also their US citizenship and liberty.
As an interim, similar to the earlier Mark VC, two latest model Spitfires, Mark IXs, were painted a light blue, as were photo-reconnaissance Spitfires. These aircraft were converted to have lightweight propellers, all armour protection removed, and the four Browning machine guns removed leaving only the two wingmounted cannons. This saved approximately 450lbs in weight, which could make all the difference in the task required. The Mark IX Spitfire was the most numerous Spitfire variant constructed. Designed at the Supermarine headquarters at HursleyPark [now the main IBM offices], the Mark IX was originally introduced to combat the new Luftwaffe fighter, the Focke-Wulf 190, which was superior to the existing Mark V Spitfire.The Mark IX also introduced the two-stage Rolls-Royce Merlin engine with a supercharger, needing a four bladed propeller to absorb and use the increase in power. These two aircraft were first scrambled to meet a Ju 86 on 11 September 1942, with one of the new Spitfires reaching an altitude of 45,000ft, but unfortunately without success.

The following day, 12 September, saw the action depicted in the painting. PltOffPrince Emanuel Galitzine, one of the pilots selected to fly on the unit was perhaps an unlikely RAF officer.
Born in Russia in 1918 to an aristocratic Imperial family, he was brought to England as a baby the following year when his family were lucky to escape from the aftermath of the final Russian revolution. The family bought the country house which is today better known as Whipsnade Safari Park. Brought up in England, he joined the RAF as a fighter pilot, and by this time at the age of 24 was an extremely experienced Spitfire pilot, hence his selection for the special unit. Galitzine’s first flight in one of the modified Spitfires was only on 10 September, when he climbed up to 43,000ft. As an interim high altitude fighter, the cockpit was not pressurised – Galitzine’s only protection against the intense cold was an electrically heated flying suit, and his survival rested on that and the primitive [by modern standards] oxygen mask and supply.
To give the reader some idea of the altitude, Galitzine reported that on this flight, he had clear visibility from Dover to Plymouth, and he could clearly see almost the whole of the North French coast as far as Belgium and Holland! Later that day, Galitzine made a second flight again to over 40,000ft, primarily to test the cannons, which could have a propensity to jam under the extremely cold conditions at that altitude. Early on the morning of 12 Sep-tember, Oberfeldwebel [Flight Sergeant] Horst Goetz and his observer Leutnant Erich Sommerof the Hohenkampfkommando [High altitude bombing squadron] took off from their base in Beauvais, northern France, on a bombing mission similar to one a few days earlier when they tracked over Southampton en route to Aldershot. That day, the solitary bomb was dropped just north of Camberley, and the Ju 86R returned unscathed to Beauvais.

At 0927, Galitzine was scrambled in his Spitfire from Northolt as soon as the Ju 86R was picked up on radar climbing over northern France. Galitzine circled over Northolt to gain altitude to 15,000ft , and also to await instructions from the ground controller for the likely heading of the bomber. The Ju 86 was tracked flying up the Solent and over Southampton at 40,000ft, by which time Galitzine had matched the altitude and course, and was still climbing to intercept at an altitude above the Ju 86R.
Although Goetz and Sommer had been in similar situations before with Spitfires trying to catch them, they had been at an altitude way above the normal Spitfire’s ceiling of 36,000ft. This one was different – to their horror, they realised that the lone pale blue Spitfire was closing fast, at their joint altitude of 42,000ft, and was going to climb above them to intercept in a dive. This was for the Germans a nasty surprise – they had been untouchable until now, and emergency evasive action was called for. Goetz jettisoned the bomb just north of Southampton, poured on full nitrous oxide to gain maximum power from the engines and tried to outclimb the diving Spitfire. Galitzine was by now above the Ju 86R at 44,000ft and started his attack run. Goetz depressurised the Ju 86R’s cabin, as just one stray round into the cabin would cause the whole aircraft to explode. From 200 yards, Galitzine opened fire with the two Hispano cannon for three seconds, believing he had scored hits on the Ju 86, ing he had scored hits on the Ju 86, which dived into a patch of high altitude mist. At the end of the first burst, the port Hispano cannon jammed, causing the Spitfire to yaw into a sideslip every time Galitzine fired the remaining starboard cannon. Galitzine made four attacks over 45 minute period, frustrated each time by both the cannon misfiring and the Spitfire’s screen misting up from the Ju 86R’s condensation trails. Those 45 minutes must have felt like an eternity for the two Germans as they tried desperately to evade every determined attack.

Realising that after a sortie that had lasted an hour and a half his fuel was dangerously low.Galitzine had frustratingly to break off the attack as the Ju 86 slipped into another patch of mist. He managed to land at Tangmere with barely enough fuel to roll down the runway, where he was refuelled and made his way back to Northolt.
Goetz and Sommer were unsure what damage their aircraft had sustained, so gingerly made a landing at Caen where they inspected the aircraft prior to returning to Beauvais. Surprisingly, there was only one cannon shell hole in the Ju 86R, and that was in the port wing. Both aircrew must have smiled ruefully at each other as they realised they lucky escape. If the cannon shell
had hit the cabin, if [unknown to them] Galitzine’s port cannon hadn’t jammed…

After this mission, the Luftwaffe realised that their high altitude aircraft were never to be invulnerable, therefore the Hoehnkampfkommando was disbanded and the aircraft and personnel were moved to other duties. This must have infuriated Goering from a Luftwaffe perspective, and also Goebbels from the propaganda angle. Although small coastal ‘tip and run’ nuisance raids by fighter-bombers continued occasionally, most daylight raids ceased almost immediately, mainly as a result of these two days of combat. Supermarine very quickly finalised the development of the Mark VI and VII Spitfire high altitude fighters, extending the wing spans and giving the pilots much-needed pressurised cockpits, thus producing a bespoke high altitude fighter that went into service fairly shortly. Perhaps unusually, all three combatants survived the war to forge successful and happy new lives for themselves. Eric Sommeremigrated to Melbourne, Australia, while Emanuel Galitzine and Horst Goetz remained in their respective home countries. Over thirty years later, Emanuel and Horst met up at a Luftwaffe reunion and relived the combat – later, they spoke by telephone to Eric Sommer in Australia. All agreed that their new found friendship was made all the more special due not only to their cameraderie as pilots, but perhaps more so to a jammed cannon.

Please enter the Page ID of the Facebook feed you'd like to display. You can do this in either the Custom Facebook Feed plugin settings or in the shortcode itself. For example, [custom-facebook-feed id=YOUR_PAGE_ID_HERE].